The RAID Pyrenees route is available on the internet. It is 700 km long and involves climbs totalling 11,600 metres - that's 10,000 feet more than climbing Mt Everest!

With Nigel as roadie we set off on Sunday,
Sailed through the night with bikes on the Volvo;
Lunch in Laredo and then on to Hendaye,
Tomorrow - we start the Big Daddyo! 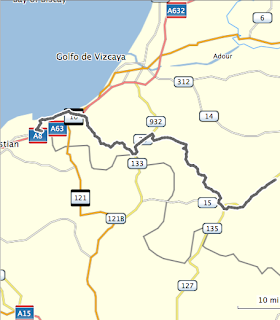 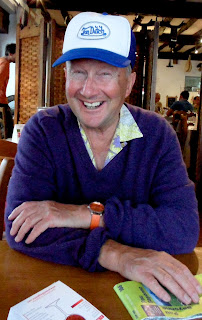 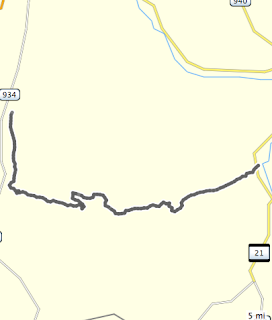 The camaraderie of the ascent of Aubisque
The pain of the hour by hour slog;
Savage ravines, tunnels and distant peaks,
But the summit was shrouded in fog! 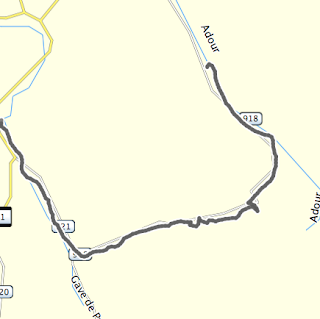 Iconic, the ride up the Tourmalet;
Our minds, determined by absence of stress,
Feet pedalling, pedalling thro' fields of hay,
Views and inclines that sure took our breath. 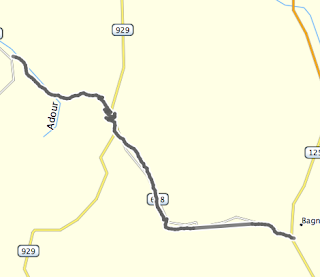 Peyresourde came after col d'Aspin,
Roller-coaster ride down to Arreau;
Climbed up like a bird, down like a Zeppelin,
Met buses on corners, so narrow! 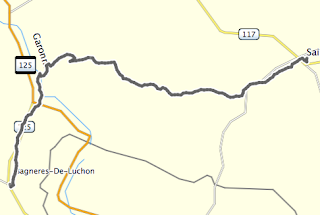 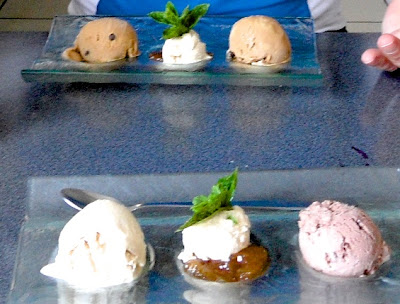 32 degrees in St Girons
With thunder in the evening
Alpine flowers and ice cream fun,
This love of France we're feeling! 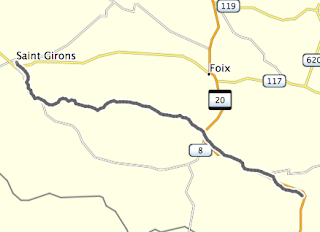 Imagine descending this hill from le Port,
Swooping round hairpins again and again;
Black olive salad - Carolina's best sort,
Then cowboys and indians in the rain! 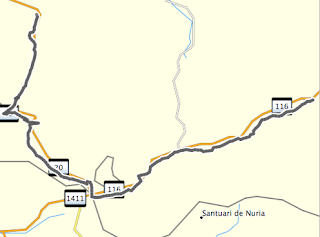 28 km climbing out of Ax -
While Nigel was off to Andorra -
More climbs after lunch our bodies did tax
And the vistas got taller and taller. 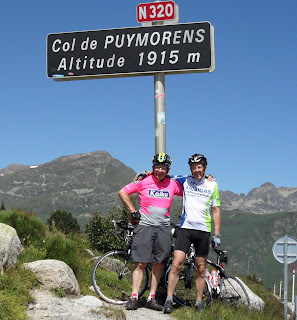 Mont Louis started the 10/10 descent,
Catalan lunch in Bourg-Madame;
The end of the swoop was heaven sent,
The reward a double choc Magnum! 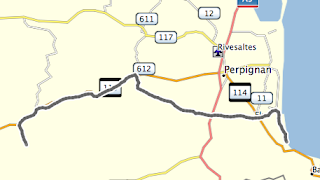 At last I'm able to post these few bits of doggerel from Schiphol airport, Amsterdam, while waiting for my flight back to Bristol. The Chinese authorities prevent access to Google-based blogs (and to FaceBook), so I was thwarted from posting the verses contemporaneously.

In the meantime - enjoy both text and photos!
Posted by Himself at 08:25 No comments:

Pre-conceptions began in Nanjing
Where the Treaty of 1842
Gave Hong Kong a lease from Pekin,
Colonial ways conceded too.

My father served on the China Station
1930s - with the Royal Navy
Frigates to quell trouble then would hasten
Tho' time was left to play and be lazy.

While gunboats patrolled upon the Yangzte
Manned by young men dressed in their whites
Little they thought of the future fancy
Mother river being dammed, doubling heights.

China leaving the gold standard
Gave sailors a chance of a killing-
Exchange rates aboard and to landward
Profited some, with many a shilling.

Now it's in China that fortunes are made
Producing iPads, clothes, and even shoes.
When memories of home begin to fade
The artefacts come out, us to enthuse 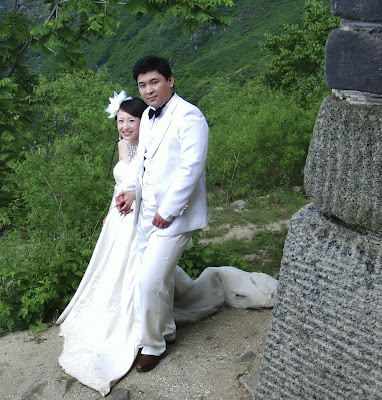 Flew Air France from Charles de Gaulle
Ten hours flight time to Guangzhou
Realised belatedly, we're quite tall,
Cramped in a 777, me and you.

Clive had flown that day from Heathrow
Dropped off by Linda, without his bike;
"Wu liu" logistics will make things flow
And Gifford's book I rather like.

Our China Road will be quite different
With World Expeditions at the helm;
Expect to hear a lot of comment
From bikes, as we tour the "realm"!

Well that's enough for just one flight
Tomorrow will bring some reality
And so I wish you all goodnight
To dream Communist practicality.

Day Two - from Guangzhou to Zhaoqing

Met by Frank who runs our agenda
Hotel Canton thence by van;
Team meeting with lovely Brenda,
Richard, Pete and Stan the man! 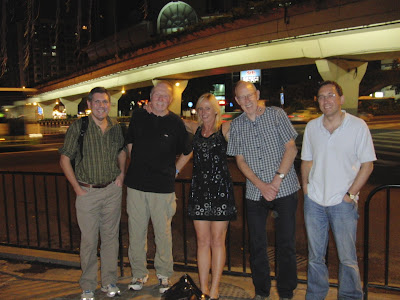 Round a table trying chopsticks
Drinking beer and eating rice
Lazy Susan's foodie bowl mix
Some of which was also nice!

Drove forever through the city
West along a crowded highway
A car on fire, more's the pity,
Disembarked at little Xiaozhou 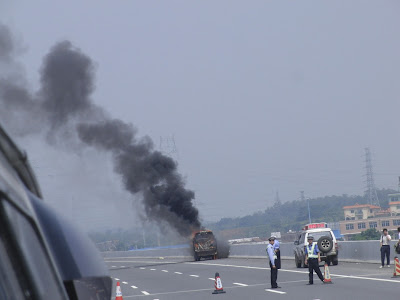 Now on bikes we cycled westward,
An embankment was our dusty path
By West River churning seaward
We're having fun and quite a laugh, 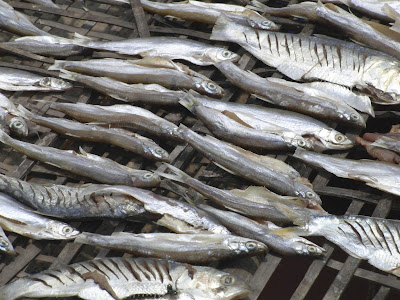 Saw fisherfolk beside the water,
Buffalo all caked in mud
Oncoming bikes where they didn't oughter
The MTB's coping with the crud. 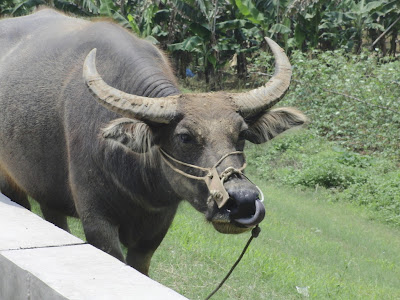 Lunch en route, more of the same,
Then scary highway, cars and roadworks
Where topiary's the name of the game,
To Songtao Hotel, where by a lake it lurks

Sure it ain't all communism
Sick and incapable left to starve
Much more rampant capitalism
Rushing on, the pie to carve

Today a rest day in the park
Said Stan, but was not to be-
Zhaoqing Dadao on cycles, hark!
Crossed six lanes with not much glee 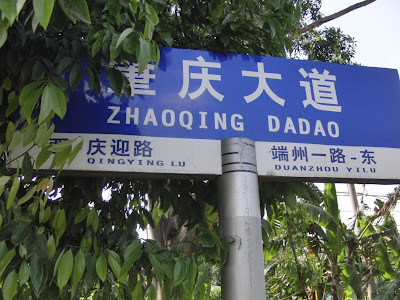 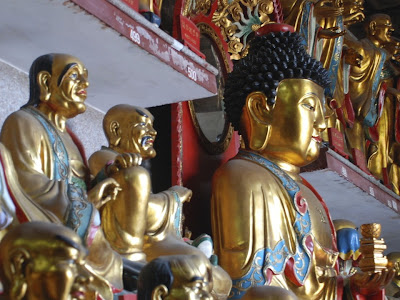 Learnt from Frank the Chinese characters
Meaning "environment" and "wind"
5,000 minimum parameters
Thousands more are there to find. 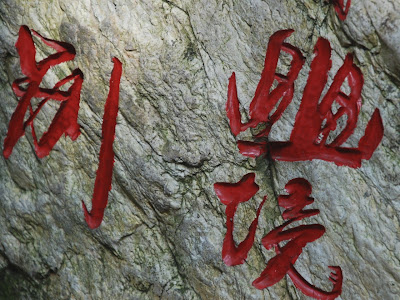 Then in the dark the stalker struck
Clipboard poised, persistent bit
Of unrelenting down on her luck
Till poof! We did a five way split.

Tomorrow there'll be lots more cycling
Promised Frank, a smile upon his face
9am start and no more hiking
Great how well he knows this place
Posted by Himself at 08:18 No comments: